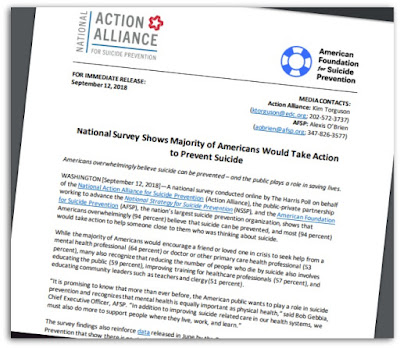 Despite the increasing numbers of suicides, there are reasons to be hopeful. One such reason is that people are beginning to understand that intervention of some kind can save lives. Better yet, people want to know how and when to intervene so that they can help.

The survey assessed perceptions of suicide and mental health among more than 2,000 U.S. adults. The survey also found the following:


While initiating these conversations may be uncomfortable, talking has the capacity to save lives.

If you are worried about someone, reach out, speak up, and ask questions. Then listen. Sometimes, one caring person can change the entire course of someones life. Sometimes, that care and concern can save a life.

To learn more about the just-released national data, go to: https://go.edc.org/jlsa
at September 20, 2018