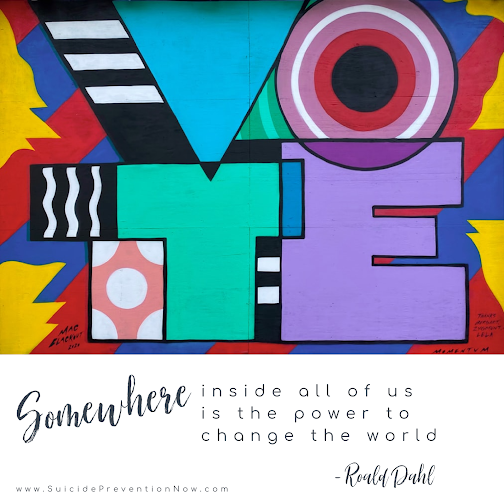 "The future of major legislation on veterans suicide prevention policy in Congress remains unsettled for now despite claims of a breakthrough this week from Senate leaders and pleas from veterans advocates to pass something on the issue as soon as possible."

Even policies that are widely supported are stalled. In example, the Commander John Scott Hannon Veterans Mental Health Care Improvement Act, passed out of the Senate in early August and has received praise from administration officials and veterans advocates alike.

The American Counseling Association also understands the importance of advocacy. In one of their most recent newsletters, they noted some of their successes;

"Due in part to your advocacy efforts, today the House has passed several mental health bills that are endorsed by ACA:

It remains to be seen whether the Senate, which will now be in session next week due to the pending Supreme Court nomination, will consider these measures before the November 3rd election. ACA will keep you updated on any developments."

"[Quoting Victor Ojakian, suicide loss survivor] When someone dies from suicide, Ojakian explained, countless others are affected by the loss. Family, friends, neighbors, classmates, co-workers and church members all share in the sorrow; the pain ripples throughout the community and remains for years to come.

That grief casts a wide net in the United States. Recent data from the National Center for Health Statistics shows that suicide has ranked as the 10th leading cause of death for all ages each year since 2008. But some lawmakers in Congress are now taking steps that they hope will save lives.

If signed into law, each bill would provide a notable amount of funding. The lawmakers allotted $10 million each year from fiscal years 2020 through 2024 for the media campaign, and the National Suicide Prevention Lifeline — a nationwide network of more than 160 centers that run crisis hotlines — would see its funding increased to $50 million"

When you vote this November (or before) remember that it is critical that we familiarize ourselves with our elected officials and their stance on mental health and suicide prevention. Learn about the suicide prevention legislation that they have proposed or endorsed. It's important. It matters.

Finally, a note from the American Association of Suicide Prevention in regard to one our suicide prevention legislative successes this past year:

On Saturday, October 17, after passing unanimously out of Congress, the National Suicide Hotline Designation Act (S.2661) was signed into law. This historic legislation will support the full implementation of the three-digit "9-8-8" dialing code for the National Suicide Prevention Lifeline through funding guidance, federal reporting, and specialized services for at-risk communities like LGBTQ-youth and Veterans. A well-resourced, easy-to-remember 988 crisis hotline will increase access to necessary resources and support in times of crisis that will save lives.

This is a major victory for the suicide prevention movement. Of the nearly 20,000 bills introduced in a Congressional session, less than 1,000 are ever passed by Congress and signed into law.

AFSP Field Advocates have supported this effort over the past 3 years by emailing, calling, and meeting with their Members of Congress and writing media outlets across the country. It is through these efforts that we have seen real change to bring our country's mental health system into the 21st century with the full passage of the National Suicide Hotline Designation Act. We thank all of our advocates that have shared their stories and advocated for this landmark legislation.

THANK YOU and CONGRATULATIONS!

There is still much more work to be done as we continue to advocate for a world without suicide. But through our joint efforts and your ceaseless passion we will save lives and bring hope to people effected by suicide. You can see AFSP's official press release here.

Please note that the 9-8-8 crisis hotline will not be nationally available until July 2022. Callers should continue to access the National Suicide Prevention Lifeline through 1-800-273-8255 until 9-8-8 is fully operational.

As always, we thank you for your support and your advocacy!

**For additional resources and to learn more about advocacy, please see our Advocacy Page, here.