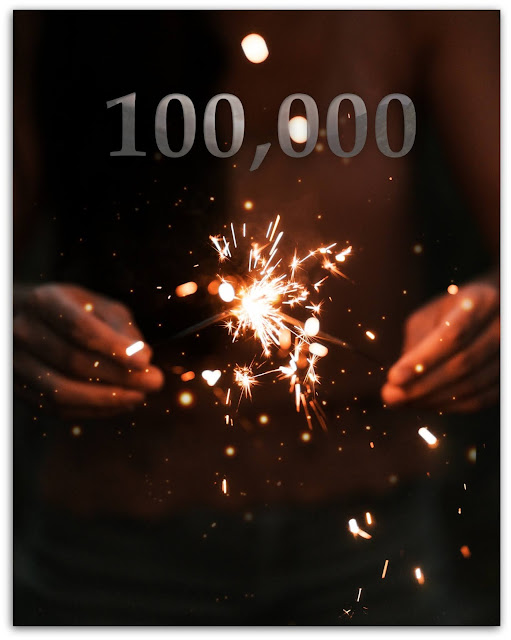 Even after all this time the sun never says to the earth, 'You owe me.'
Look what happens with a love like that. It lights the whole sky.”
- Hāfiz

This morning, the Lighting Up the Sky blog crossed a threshold. The number of times the blog has been viewed surpassed 100,000.

It's an amazing thing, that what is written here has touched so many people. Not quite three years ago, I started this blog. I wasn't sure where it was going. At first I thought I'd share parts of the journal I'd kept in the months after John died. I did that because of the number of people who were telling me that my writing about suicide was helpful to them. The most powerful feedback then remains the same today. When I hear someone say 'I learned something important about suicide by reading your blog,' it motivates me. But when I hear someone say 'when I read your blog, I felt less alone,' I am humbled by those words. I am humbled by the fact that this blog has impacted people in this important way.

So I stepped back and paid attention to what was being said. People told me they appreciated that someone was talking about suicide. They told me they didn't feel they had a voice. Many survivors of suicide loss felt they didn't have a right to mourn. Nearly every person I spoke to said they were hurt by the ways that people didn't understand suicide. Whether they were a survivor of attempts or a survivor of loss, they reached out to me to talk about the agony that this lack of understanding can cause.

Quickly I realized I could do more with this blog than I originally intended. I recognized that there were an immeasurable amount of people whose lives had been touched by suicide, not just me. Asking those people to share their own experiences with suicide was important. The more lives and voices that this blog could share, the more of a reminder that none of us are alone.


"People don't understand!" is what I was hearing.
"So, tell them," has always been my response.

I understood too, the importance of being allowed to grieve a suicide loss. To be sad, angry, hurt and sometimes relieved. I knew firsthand that the stigma around suicide complicates grief. Often, we are told we shouldn't be talking about the loss. We are told that we should be mad at the person we lost, that we should forget about them.  Or sometimes the opposite - we are told we can't be mad at those who die by suicide, at all. We can't rage against a person's mental illness and we are not allowed to celebrate the beauty of who the person was, either. It is an excruciating paradox. So, I wanted this blog to give people permission to react to their grief in any way they needed. And I especially wanted to celebrate and encourage the beautiful side of grieving and the beautiful side of healing too.

I am both honored and humbled that so many people have been interested in what we, those whose lives have been touched by suicide, have to say. Our voices matter. As Robin Williams once said, "No matter what people tell you, words and ideas can change the world."

Speaking of quotes, many people have asked me why I named this blog Lighting Up the Sky. The name is derived from a quote by the Persian poet, Hāfiz. 'Even after all this time the sun never says to the earth, you owe me. Look what happens with a love like that. It lights the whole sky.'

When I started the journey of writing this blog, I was struck and saddened by the often held notion that those who die by suicide are selfish. As a survivor of a suicide attempt myself, I knew that many of us truly believe that by leaving, we are doing something good for those we love. I struggle with this to this day. If I hurt someone, I wrestle with wondering if my loss would be an adequate reparation. The pain of this deliberation cannot be put into words. We think we are relieving our loved ones of a burden. We believe that we don't deserve love or to be cared about. In this sense, though misguided, our actions are the opposite of selfish.

I considered the lack of understanding about suicidal ideation, the lack of resources available to those who need them, and the lack of effective treatment. Given all of the prior, I believe that we often look at suicide from a faulty and painful perspective.

But what will happen if we flip that perspective? How much more will be accomplished if we stop blaming the ones we've lost? I believe that often it is not those who are losing their lives to suicide who are failing us. Instead our culture, the stigma, and the silence around suicide, failed them.

What if instead of focusing on their owing us forever unfulfilled promises, we focus instead on the beauty their presence in our lives had once offered? I would think if we did this, while their loss would be no less heartbreaking, it would be a measure less dark.

That's how I want to think about the people I've lost to suicide. Not that they have darkened my life, but instead, I want their memory to light up my sky.

I started this blog for John Macaluso. I loved him. I love him still. He was needed in this world when he lost his life to suicide. And I know he'd be proud that this blog has had an impact on so many people.

I continued this blog for my mother. She was a writer herself. She was smart and funny. She was needed in this world when she lost her life to suicide. She would be proud of my writing too, I know.

And I write for this blog still, for me. It has been much easier for me to write about being a survivor of suicide loss than it has been for me to write about my own attempts and my own thoughts of suicide. It is important to be able to talk about these things without feeling ashamed. Speaking up is one of the most important ways to fight stigma. My words, like those of all others who've been touched by suicide, are needed in this world.

And thank you especially to all of my fellow suicide attempt survivors and suicide loss survivors. You are the bravest people I know.

And finally, to all those who have lost their life to suicide - know that we are fighting for you. You are not forgotten. The sky lights up for you, today and every day.