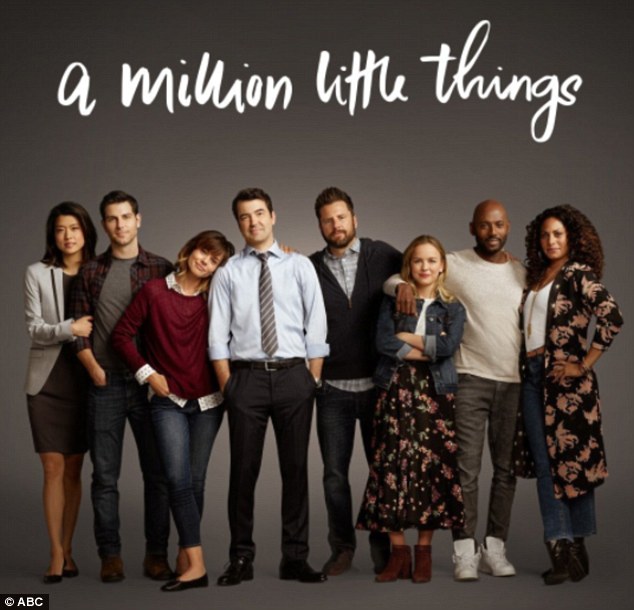 Today marks the premier of ABC's new television series, A Million Little Things. I wanted to talk a little about the television show, especially given its premise, which has to do with how a suicide impacts the survivors left behind.

Beyond the previews (you can see one yourself, below), I have not seen the pilot in its entirety.

I am not a professional television critic.

And finally, the name of the character on the show who dies by suicide, is John. John was my boyfriend's name and that makes part of the introductory dialogue in the preview difficult for me to hear. ("You aren't going to believe this. John killed himself.") My difficulty in that innocuous part of the show may be influencing this blog post. Just an FYI.

Ok, having said all that, here is what I want to offer:

If you choose to watch this show and you are a survivor of suicide loss or a survivor of a suicide attempt, it may bring up difficult thoughts and emotions. Give yourself permission to turn off the tv, change the channel, or watch it another day.

Some survivors may feel that they are fine and ready to watch this type of subject matter (or they may be curious about how the topic is handled). However, remember that negative memories and/or feelings can be unexpected. It can help to give yourself permission ahead of time to remove yourself from situations that you find overwhelming. You do not have to push yourself f to watch certain scenes or any of the show, at all.

Arrange to watch it with a friend or loved one if you can. Having someone with you may help you to feel supported while watching. It can also help to to have someone to talk to during or after the show. Be sure that you and the person you are watching with agree to accept the decision if either of you needs to turn off the tv or change the channel.

Sometimes, we are distressed by memories that are brought up during an event, but the impact doesn't hit us until hours or even days later. Be prepared over the next few days for unexpected stress, anxiety, sadness or more acute grief to come up. Again, have a plan for if this happens. Perhaps there is a friend or a counselor you can call.

Whether it is a television show like this or any other event that brings up painful memories, be gentle with yourself. Allow yourself to avoid the situation if necessary. Always ensure that you have others to talk to when these things occur. Talking about the feelings you experience when you are overwhelmed can be very helpful in taking the power out of those feelings. However, pay attention to emotional 'flooding' when talking about your memories. Avoid discussing detailed memories, which can serve to re-traumatize. If you find that your voice is rising or you are beginning to speak very fast, or if you feel heightened anxiety while talking, try to slow yourself down. Take some deep breaths. Remind yourself that you can talk about your feelings a little later, or just in small increments.

Next, let's talk about responsible media representations and presentations of suicicde related material. Whether you have been directly impacted by suicide or not, it is very helpful to know the following guidelines. If the show seems to be pushing the boundaries in these areas, please consider being an advocate for suicide prevention and contact ABC to let them know that you would like them to handle the topic differently moving forward. Please note - again, I have not seen the show, so I am hopeful that all of the guidelines are already in place.

First, it is critically important that the Suicide Prevention Lifeline number (1-800-273-8255) is made available at either the beginning of the show or the end of the show (or preferably, both.) This is particularly important because this subject matter does have the capacity to exacerbate some people's thoughts of suicide. Being reminded that there is a lifeline available is very helpful and could even save lives.

Third, it is important that she show not get into the gory details of the suicide. It is always best if the act itself is not portrayed on the show, and that there is no overly descriptive language. There shouldn't be lengthy discussions of portrayls of the method used either. (They could potentially be construed as a 'how-to' lesson.)

Finally, it is important when reporting on suicide, that the focus include the pain of those left behind. (I am very hopeful that this will be the case on this show, given it's is supposed to be about those who are left behind.)

Having said all of that, I want to note that at this juncture (not having seen the show), I am really pleased that this subject matter is being addressed during prime time television. Offering opportunities for people to learn more about suicide and giving them a better understanding of the experience of not just those who are suicidal;, but also those left behind, is critical to fighting stigma.

And for my fellow survivors of suicide loss, whether you choose to watch the show or not, know that my heart is with us all and I have high hopes that shows like this will help others to be more kind and understanding about our grief and about suicide in general.