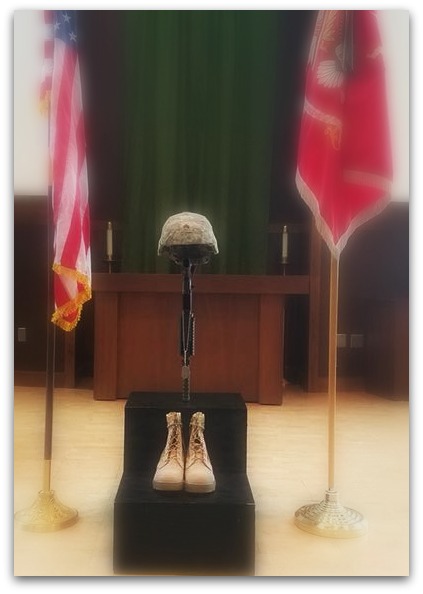 Many people are aware that the number of military suicides is at an epidemic level. It is impossible to work in the field of suicide prevention without seeing the connection. The second post in the Our Voices Matter series on this blog was an interview with Nancy Varella Lendway, a military mother who lost her son, Vito, shortly after he returned from having served in Aghanistan. I personally attend a local support group for survivors of suicide loss, and one of the members lost her brother, a military veteran, to suicide. In my online groups, there are always numerous members whose loved ones were military veterans (or actively serving) when they died by suicide. In fact, the photo above, which is from the services of Sergeant Benjamin Bruce, was provided to me by a woman in one of my online support groups.

As with all aspects of suicide prevention and awareness, it is very important to understand the facts in order to get a better sense of the urgency of this situation.

These things are known about military related suicide deaths. The cause for the high number of suicide  deaths is not as concrete. Likely, multiple factors are at play. As such - the vast majority of active duty or veteran service members are in higher suicide risk categories than the general public.

One risk factor is related to post traumatic stress disorder (PTSD). It is estimated that 10% - 30% of all service members returning from combat zones have prolonged PTSD-like responses, or the full blown disorder. PTSD has been shown to exacerbate suicidal ideation as well as increase the number and severity of suicide attempts that a person might have.

Another risk factor is related to head injuries. Those in combat zones are far more likely to experience head injuries, than someone in the general public might. Research has shown that individuals who have had a single concussion are three times as likely to die by suicide.

Adding to the above, being a survivor of suicide loss increases a person's risk of suicide, and given the number of suicides in the military, chances are greater than average that those who serve will know others who have died by suicide. Depending on the closeness with the individual/s who have died, the increased risk factor may be mild or it may be significant.

Finally, one of the major risk factors for suicide has to do with access to means. In other words - how easy is it for a suicidal person to access a means to complete the act of suicide. One of the most lethal means of suicide is use of a firearm. Those who serve in the military are far more likely to use a firearm when dying by suicide. In fact, in comparison with the general public, those in the military are also more likely to own firearms in their civilian life, and they are more likely to know exactly how to load and use them.

All of these facts contribute to suicidal feelings, intent, and very likely drive up the numbers of suicides completed. At the same time, because of the wide variety of causes, addressing military suicides is a complex effort that requires comprehensive overhauls in many areas.

Active duty personnel and veterans both, need access to better, stronger, and more consistent healthcare services. Services upon return from combat need to be very proactive and incorporate comprehensive suicide risk assessment. We must improve our ability to detect and treat disorders such as PTSD. We must take a look at the pro gun culture in our country as a whole. There are no easy answers, and many of these issues require lengthy and complex overhauls, but the time we've had to eschew overhauls in the name of simplicity has passed. Too many of the brave men and women who serve or have served in the US military, are dying.

Too many people are suffering. Too many hearts are breaking.

Special thanks to Kiko Carrie Yoshida, for allowing me to use the photo at the top of this post. Kiko, I am so sorry for your loss, my heart is with you, as it is with all of my fellow survivors of suicide loss.
at September 25, 2018