We are rewarded for hiding ourselves.
The fact that we can function, at great cost to ourselves, is used to beat up the people who cannot function.
S.E. Smith
Not quite six months after John died, I reached a turning point in my anger. Up until then, most of my anger was focused on the mental health care systems that had failed him. I was enraged at the lack of information, lack of adequate treatment, and the industries that prioritized cost effective measures over making mental health resources available to those who need them.

I was also angry at the lack of resources and support available to those who love someone with a mental illness. I hated that much of the messaging for partners and loved ones is that they either leave, love perfectly, or assert boundaries that are nearly impossible to manage. All of these messages fell terribly short of respecting the imperfection of being human.

And if we lose someone to suicide? We disect in excruciating detail the ways in which we'd been in conflict with the person we'd lost. We continue to confuse the illness with the person we loved. How could they have done this to me? But we must begin to replace the words 'him/her/they' with 'the illness,' in order to have an accurate reflection of what was going on.

Similarly, we ask ourselves: how could I have said this to him? How could I have done this to her?  The answer is that we weren't fighting with the person we lost, we'd been engaged in an argument with an illness.

So yes, in the months following John's death I was angry. And I was also ashamed. I survived only because the people who loved me held me up. I know too though, it was often a struggle for them.
My guilt was so incredibly heavy, it dragged me down again and again. I'd lost my mother to suicide. I'd nearly lost my own life. And now I'd lost John. I didn't understand why life was so unfair. Not in a self piteous way, but in all earnestness. How could this be happening? How would I ever be able to incorporate the reality of these losses into a life that might include hope and joy as well?

It was exhausting. The grief was exhausting. My self flagellation was exhausting. I was tired of the confusion. And then one day I realized that I would never overcome the worst of my pain, if I didn't better understand what had happened to John, and myself, and my mother.

It is important for me to point out that amidst all of this emotional exhaustion, I remained motivated by wanting to defend John. Because he died by suicide, there was this constant inference that he was selfish. But I knew him well. He was human with many flaws, but selfishness was the least among them.

If nothing else, I understood that John had lost his life to a mental illness that was beyond his control, and yet he was being blamed for it. I knew that he'd fought extremely hard to rebound from the ways his illness impacted him. I knew this because he told me, I knew this because I saw it.

When John died, I knew he deserved far better than the fallacy that he'd been weak or selfish.

I thought about when my mother had died by suicide 15 years earlier. When she died, I was beside myself with grief and guilt. My lack of understanding set me up for years of feeling responsible and years of feeling as if the similarities between her illness and my own meant that I would lose my life to suicide too.
And then I thought about my own suicide attempt, which had happened less than five years prior to John's death. In the weeks following my attempt, family members stopped speaking to me. People unfriended me on Facebook. I received one anonymous text: "Don't do this to your son." To this day, I don't know if that was supposed to be instructive or accusatory.

I changed my phone number and stopped replying to messages.

The truth is, I hadn't known the answers to the questions people were asking. I agreed with the premises though. There was something terribly selfish/bad/wrong with me. I was not worthy of friendships or forgiving. I couldn't understand how I had 'let' this happen either. I, like John, had tried desperately to stay alive, for years. What went wrong and how could I have failed so terribly? The accusations from others and the self blame on my end was agonizing.

I had bursts of blaming others for my despair, and bursts of feeling defensive of myself. Mostly though, I agreed with what the world at large says about those who are suicidal: I was selfish. All I cared about were my feelings and I was incapable of thinking about the feelings of others. I was rash and weak and not to be trusted. I was not worthy.

When my mother died, initially I was convinced that I should have 'done something different' to save her. Fifteen years later when John died, I believed that I should have 'loved him better' in order to save him. With my own attempts, I just knew I'd failed everyone who loved me. In all three, I still struggle with guilt some days. This is common for people whose lives have been touched by suicide. Guilt offers very few people mercy.

Our culture tells us that death by suicide is driven by choice. This belief creates an agonizing contemplation on the part of the loss survivor. 'Why didn't the person I lost choose me over death?' And for the attempt survivor, the stigma driven suggestion that they made a selfish choice only serves to add a layer of shame on top of what is likely already profound self hatred.
How do we challange stigma and change the unhelpful premises that exacerbate it? We speak up.

After John died, I realized that my voice was important. I am the voice of someone who has experienced all these facets of suicide and stigma. I am a multiple loss survivor. I am a suicide attempt survivor. And I am a person who, at times, still struggles with suicidality.

This is why I use my voice. Because it is those who speak up who are making a difference. If those who read learn something, that can potentially lead to life saving advocacy and action. And for others, knowing that they not alone and that they are understood can save a life too.

There is an African Proverb: Not to know is bad; not to wish to know is worse. If suicide has touched your life, I encourage you to reach out, ask questions, and learn more. Educating yourself is the first step toward compassion.
And I believe that knowledge and compassion have the capacity to change the world.

[The essay above was first written in June of 2018.]
If you are looking for resources and organizations that promote suicide awareness or prevention - click on the image below to reach our Links/Resources/Learn More page. 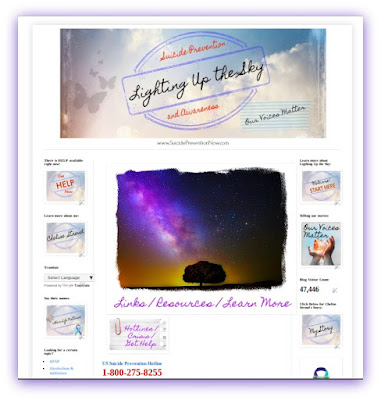