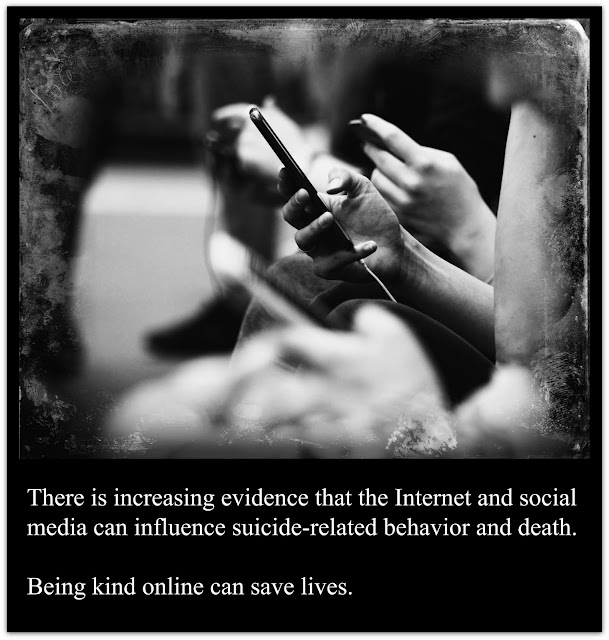 After many years of steadily decreasing, the suicide rate for teens began to go upward in 2010. That trend has not slowed down, and suicide is now the second leading cause of death among young people.

Studies have shown that the rise in social media applications and useage may be part of the reason. While not yet fully understood, there are several aspects of social media that likely contribute to the rising numbers. It is important to be aware of them, so that you can be on the lookout for these issues.

One train of thought is that social media postings allow a person to only show select scenes from their life. It is easy to craft the appearance of having a life that is perfect. Other teens may see this and feel envious, or worse, that their lives are worthless in comparison. It is important to remind your children that people have control over what they show on social media, and that all people have challenges and difficulty in their life, no one person is struggling with these things alone. Just because someone may not share these challenges on social media does not indicate that their life is 'perfect' or 'better' than other lives.

Another way that social media has been shown to exacerbate feelings of suicidality is that the medium often serves as a vehicle for glorifying suicides. It is very important when a suicide occurs, that public reporting be cognizant and respectful of guidelines around how to be responsible when sharing the news. For example, describing the specific methods of suicide is ill advised, at times it can serve as a how-to. And whenever reporting about suicide, the Suicide Prevention Hot line should always be easy to find in an article or posting. No one should post notes about how 'brave' someone was to have taken their life, and posts should veer away from stating that when someone dies by sucide, they are to be envied. However, on social media, the posters (youth in particular) are not often aware of these guidelines. Their online discussions can be very triggering to others who have been or are newly struggling with suicidal feelings.

In addition, it is disturbing but important to know that there are many pro-suicide and suicide-pact websites and chatrooms on the internet. For teens, these are not hard to find. Because of their reprehensible nature, I will not name them and I will not provide any links or backlinks of any kind. However, it is important for parents to know these sites exist.

However the most devastating impact social media has had on the suicide rates of young people has to do with the advent of online bullying (or 'cyber-bullying'). Bullies tend to be more ruthless on social media. They are not in a position of having to see the person they are bullying, or the immediate impact it has on that person. The bully may say things they wouldn't say, if they were to be confronting someone in person. And their bullying has an exponential reach. The person being bullied has to cope with the fact that the bullying may be viewed by thousands of people, maybe more. And because of the permanency of words and posts online, the bullied person may feel like the immediate feelings experienced when being bullied will never go away.

It is for all of the above issues that the impact the influence that social media has on suicide must be addressed. If you are a parent, you should regularly monitor your children's use of social media and discuss with them anything you see of concern.

If you see online bullying occurring, the advice is the same as if it were in person. Jump in, let the bully know that their behavior and words are not appropriate and not ok. They should be reminded that online bullying is not cool or funny, and in fact it is extremely cowardly. And then let the person who is being bullied know that you are sorry this is happening, you do not agree with the words being said or the actions that the bully is taking. Let a bullied person know that you are on their side. Kids need to know that it is never ok to bully another person online and that the action can be life threatening to the person being bullied.

Finally, it is important to know that most social media platforms have methods to report if you are concerned that someone is making threats of suicide or appears to be announcing their plan to die by suicide. If a person is threatening suicide, the faster they receive intervention, the better. Reporting a concern does not mean that person will automatically be arrested or confronted. I does mean that people trained in suicide assessment will take a look at what is going on. Use these reporting methods whenever needed.

No matter what your age, remember that it is ok to 'unplug' from social media for as long as you want. If anything on social media is causing you stress, take a break.