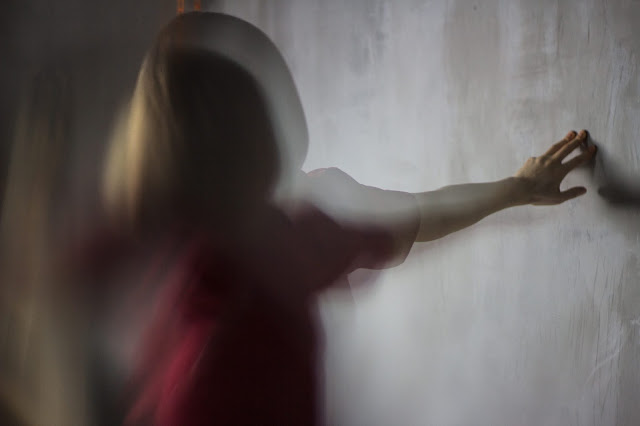 No one heals himself by wounding another.― St. Ambrose

Conflicts, struggles, and painful life circumstances are very often a part of the story of the person who dies by suicide. Some of these are terrible conflicts. People can say horrible things to each other in the heat of an argument. Frustration can bring out the ugliest part of us. The impact that mental illness has on a relationship is confusing at best and tragic at worst.

Often the mental illness that complicates and intensifies conflicts between two people is the same mental illness that lends itself to suicidal despair, or that fuels irrational and impulsive behavior that leads to a death by suicide (even before an argument has a chance to settle or be worked out).

In these cases, what I have seen is survivors of suicide loss who are ravaged by guilt. Suicide takes the life of one person and then guilt destroys the lives of those left behind.

I want to tell the survivors of suicide loss the same things that all experts on suicide would say:

It is not your fault that you did not know any better.

It is not your fault that you yourself did not have enough resources or enough information to understand someone's mental illness or how to help them.

It's not your fault that frustration and pain and chaos entered into your own life and that you reacted.

Try to remember, it is a sad truth but people do betray each other. People do fight. Divorces happen.

Heartbreak happens. People lose their possessions and homes and even lose custody of children due to these ugly circumstances. And yet, people do not take their lives because of it.

Suicidal despair is the result of many things, but it is not caused by conflict with loved ones. It is not appropriate nor is it accurate to blame a suicide death on someone else, even if that person was involved in a conflict with the person who died. Even if the person who died overtly blamed someone else, either as part of their last words or in a note. I feel very strongly about this, and I am not alone. Other people are not the cause of a suicide.

Bullies intentionally use words, humiliation and cruelty as weapons - and those weapons can be lethal.

Unfortunately, in our culture we routinely excuse the actions of the bully, while suggesting to the victim that if they can't find the strength to tolerate or change or fix the bully, then they are at fault for being victimized.

Just ignore it.
Words can't hurt you.
Toughen up.
Stop being so sensitive.
You just need to fight back.

And meanwhile, as we've been offering these platitudes, suicide has risen to the second leading cause of death for young people aged 10-24 years old. So, while we have been telling our children that 'kids will be kids,' kids are dying. We are talking about kids as young as eight and nine years old.

There is absolutely nothing that is funny, clever, strong, or impressive about a bully. 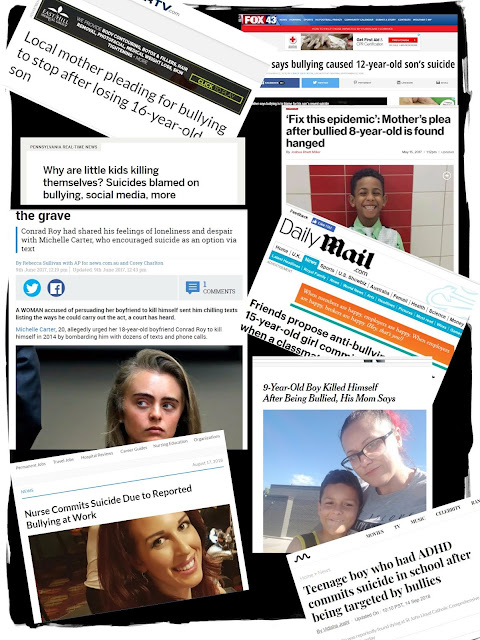 And bullying is not just a youth problem. Bullying has been associated with the suicide deaths of adults, as well.

It is for this reason that it is critical that we recognize the different forms of bullying, and that we intervene when we see it, or ask for help if it is happening to us.

If we don't include comprehensive efforts to address bullying in schools, on playgrounds, in the workplace, and in other areas where bullying occurs - then it will not be possible to have effective suicide prevention.

In order to better understand bullying, let's start with a definition. Bullying occurs when a person repeatedly, intentionally, and without provocation, humiliates or hurts someone else. Merriam Webster describes a bully as someone who is habitually cruel, insulting, or threatening to those who are weaker or vulnerable.

Bullying can take place in many different ways. Some of the more common forms of bullying are as follows:

(If you want to learn more about these types of bullying, bullyingstatistics.org is a great resource.)

Aside from learning about the different types of bullying, it is even more important that we know what to do when we see or hear about it happening.

For years, the primary advice was to 'toughen up' the victim. This expectation was not fair, and it was not appropriate for many bullying victims. In recent years, the venues for bullying have expanded (including online bullying, social media bullying, text bullying) and the advice to the victims is not sufficient. People are suffering from PTSD and other long term ill effects of bullying, in no small part because of a culture that fostered a lack of intervention when bullying was happening. Today, people are being bullied to death. There is even a name for this now. 'bullycide.' People are dying and the number is increasing.

Effective intervention is incumbent on us all.

Research has shown that bullies can be stopped and that their behavior can be changed. It is important that they are confronted and told in no uncertain terms that their behavior is unacceptable and must not continue. According U.S. federal government website, StopBullying.gov:

"When others respond quickly and consistently to bullying behavior they send the message that it is not acceptable. Research shows this can stop bullying."

In addition, it is important to address the pervasive pro bullying-culture which allows bullies to thrive. Schools need to have mandatory anti bullying educational programs and trainings in place for both staff and students.

The evidence that bullying is life threatening is now so abundant, many states have laws in place that make bullying behavior a criminal offense.

If you see bullying occurring, eyesonbullying.org offers the following suggestions for successfully intervening:

Intervene immediately. When you do nothing, you send the message that bullying is acceptable. If you ignore or minimize the problem, victims might not think that others care, or they may believe that there is no one who can help.
Intervene even if you’re not sure it’s bullying. Observing actions, words, body language, and facial expressions will help you determine if bullying is occurring. Even if it’s not, aggressive behaviors need to be stopped.
Stand between or near the victim and the bully, separating them if necessary, so as to stop the bullying behaviors. For young children, consider removing them from the situation to a “time-out” area or room.
Respond firmly but appropriately. Remain calm, but convey the seriousness of the situation. Announce that the bullying must stop. Describe the behavior you observed and why it is unacceptable.
Get help if needed. If the bully is using physical force, or there is more than one bully, you may need to find another adult to help keep children safe and protect yourself.
Do not respond aggressively. Using aggressive behavior sends the wrong message that this is a good way to solve problems. It may also prompt a bully or a bystander to increase his or her bullying behavior or become aggressive toward you.
Avoid lecturing the bully in front of his or her peers. Your goal is to end the behavior, not humiliate or shame the bully. Rather than serving as a deterrent, lecturing and scolding often provide the bully with attention that he or she finds rewarding.
Don’t ask children to “work things out” for themselves.  Bullying is different from an argument or conflict; it involves a power imbalance that requires intervention.
Give praise and show appreciation to helpful bystanders.  Children or others who try to help the victim or stop the bully are key to bullying prevention.
Stick around. Remain in the area until you are sure the behavior has stopped.

Always remember, when you intervene and assist someone who may be experiencing being bullied, you may be saving a life.

If nothing else, you are helping to lessen someone's pain in the moment. This in and of itself is an honorable thing to do.