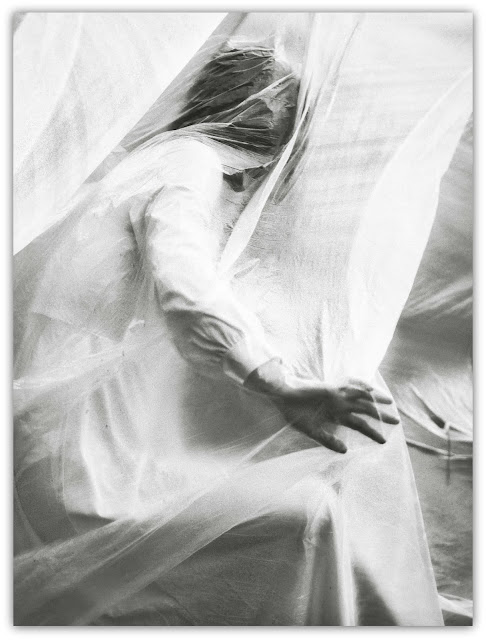 
Let's talk about Post-Traumatic Stress Disorder (PTSD). Our internal response to trauma is often the platform for suicidal thinking, behaviors, and completions. If we do not understand and address the role trauma plays in the lives of individuals who die by suicide, we won't achieve comprehensive suicide prevention.

To better understand the connection between suicide and PTSD, let's start with a definition. Post-traumatic stress disorder (PTSD) is a psychiatric condition that can occur in people who have experienced or witnessed a traumatic event such as a natural disaster, a serious accident, a terrorist act, war/combat, rape or other violent personal assault. PTSD can also occur after sudden severe emotional trauma such as experiencing the unexpected loss or death of a loved one. Finally, PTSD can also occur after prolonged exposure to environments in which a person is being bullied, neglected, or suffering abuse (physically, sexually, mentally, emotionally, or otherwise).

To put this into perspective, let's look at some data:

And again, putting the suicide/PTSD link into perspective, when we look at those who are the highest risk of suicide, a diagnosis or probable diagnosis of PTSD is pervasive:

Given the close connection between trauma and death by suicide, we have to look at what is happening to the brain, during severe or prolonged traumatic events.

Many people incorrectly assume that PTSD is related to purely mental/emotional reactions to these events. This misconception is not only highly stigmatizing - it is also inaccurate. Unfortunately this stigma impairs our ability to prioritize the research needed to improve treatment of PTSD. Stigma suggests that PTSD only happens to those who are not emotionally strong enough to manage their feelings during and after trauma. This belief is very damaging because it further shames those who are suffering, and profoundly denigrates the deceased.

Here is a graphic that shows what is actually happening at the inception of PTSD:

What the graphic shows is that during trauma, your emotions and reactions are dictated by physiological responses and not by rational thinking. Survival mode is not conducive to well thought out rational behavior. By matter of necessity, we react based on sights, sounds and emotional stimuli. We are not reacting based on thoughts or access to cognitive information. Our behavior becomes singularly oriented toward avoidance of further pain and trauma. Our actions are guided by physiological changes in the brain, not thought processes. Here are the most important words in the graphic above, as they apply to our traumatic events: 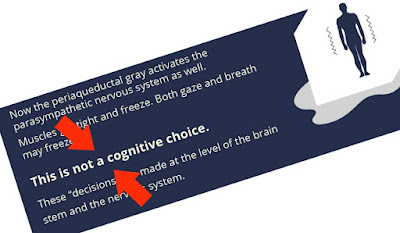 This is NOT a cognitive choice.

Following trauma, some brains are unable, without effective treatment, to maintain consistent physiological stability. Some reasons are known, many more are not. More research is desperately needed.

For those with PTSD, they may have periods of significant stability, where they are able to manage many of life's normal ups and downs with appropriate levels of pain and frustration. When their PTSD is activated however, their reactions to normal stressors may seem heightened to a level that appears unreasonable. Some of the symptoms of PTSD include ongoing emotional distress, personality disturbances and/or changes, severe anxiety/aggression/depression and poor impulse control. All of these symptoms, while seemingly based in 'thought processes', are actually dictated by the same brain changes that occurred at the inception of the PTSD.

Some of the most successful treatments for PTSD involve behavioral therapies, not necessarily cognitive therapies. In other words, we are seeing success in treating those with PTSD when we work to provide them with skills for recognizing and managing symptoms when they occur. Traditional 'talk therapy' that encourages a person to remember and discuss events in their life, has shown a propensity for re-traumatizing those with PTSD. We must make long term and easily accessible behavioral (skills based) therapies available to all individuals who are suffering from PTSD.

There are other significant developments in PTSD research. Researchers have found that the condition can be detected via brain scans.

"Brain imaging studies have shown alterations in a circuit including medial prefrontal cortex (including anterior cingulate), hippocampus, and amygdala in PTSD. Many of these studies have used different methods to trigger PTSD symptoms (eg, using traumatic cues) and then look at brain function. Stimulation of the noradrenergic system with yohimbine resulted in a failure of activation in dorsolateral prefrontal, temporal, parietal, and orbitofrontal cortex, and decreased function in the hippocampus.173 Exposure to traumatic reminders in the form of traumatic slides and/or sounds or traumatic scripts was associated with an increase in PTSD symptoms, decreased blood flow, and/or failure of activation in the medial prefrontal cortex/anterior cingulate, including Brodmann's area 25, or subcallosal gyrus, area 32 and 24, as measured with positron emission tomography (PET) or functional MRI (fMRI)"

What do all those words above amount to? Again:

PTSD induced behaviors and 'decisions' or 'choices' actually reflect the physical impact of traumatic events on the brain's ability to respond, and do not reflect decisions or choices.

PTSD is a formidable enemy when it comes to suicide, but there is hope. With more research, we will be able to further streamline finding the best behavioral therapies to support those with PTSD symptoms, and we may be able to identify other treatments that could have a restorative effect on the damaged brain functioning that occurs when PTSD is present.

If you suffer from PTSD, know that your symptoms are not your fault and not a product of your being weak, or selfish, or 'unable' to handle your problems. Know that there is hope and there is help, and that many people are fighting to ensure that better treatments are on their way.

If you love someone with PTSD, please keep all of the above in mind, educate yourself further, advocate for your loved one so that they have access to support services and treatment of their own, and reach out for support for yourself. And always have the suicide prevention lifeline phone number (1-800-273-8255) on hand. (There is a special number for those in the military, as well.)

And if you have lost someone to PTSD, let me say this: For my generation and all of those prior, we have spent our entire lives conditioned to believe that when someone dies by suicide, they made a 'choice' of some kind. We take that belief and compare and contrast the 'choice' to die with a choice we think they could have made to stay alive and be a part of our lives.

The questions we are asking are agonizing. They are also inaccurate. With PTSD, the accurate question, is this:

What impacted my loved one's thought processes so that they were unable to make the choice to live?

That is the question that we must answer. Those answers will lead us to the solutions that will begin to appreciatively save lives.

We must end the stigma. Have the conversations. Make resources available. Fund the research.