Beginning and Ending With Love 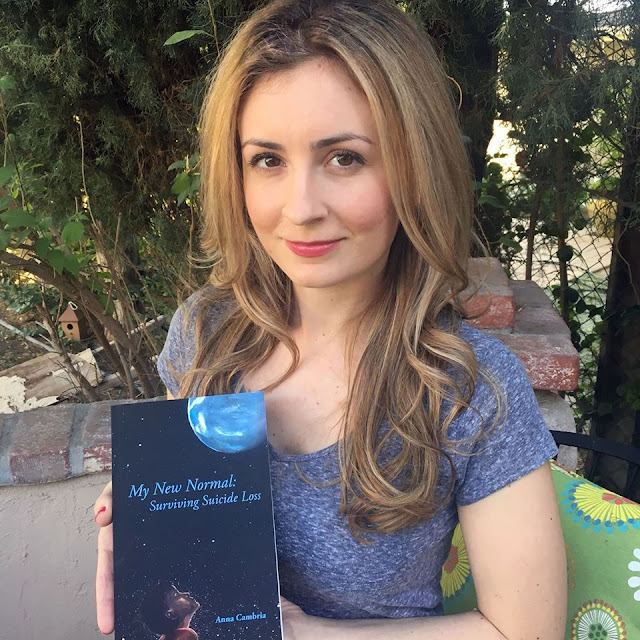 Anna Cambria is a typical twenty five year old. She enjoys reading and writing. She pursued those interests when she went to college. In 2016 she graduated with a BA in English Literature from San Diego State University, in Southern California.

Look below the surface though, and there is something more. Like all people, the foundation of who Anna is has been shaped by her life experiences. One life changing experience occurred just weeks after Anna graduated from college. On July 8, 2016, Anna Cambria's father died by suicide.

At the age of twenty two, Anna became a survivor of suicide loss.

'My entire world changed on that tragic day," she says.

Anna's effort to use her own experience to reach out and help others is both generous and inspirational. I am always impressed with the courage that fellow survivors of suicide loss exhibit when they share their story, and I was no less so when I talked to Anna. I am equally honored to be able to share her story with you, now.

Anna admits that like many people, before her father died she didn't understand the complications of depression. She says that she thought that going out and doing something fun would 'cure' the condition. Since losing her father though, she has learned that this is a misconception. This was a particularly powerful lesson as she struggled with her own feelings of intense grief and sadness.

"People who have never experienced depression or been a survivor of suicide loss are not aware of the struggles and recovery time," she says.

Anna's father made two suicide attempts, two weeks apart. The second attempt took his life. She says that until his first attempt, she didn't know that her father had been feeling suicidal. Like many people who are struggling with thoughts of suicide, Anna's father did not show recognizable signs.

"Dad hid his suffering under his smile."

Anna's father was struggling with business and financial problems. Anna also believes that her father experienced trauma around his parents divorce, which happened when he was fourteen years old.

"He buried his emotions and never sought help. He would never break down his wall,"  Anna explains.

Today, Anna believes that part of the reason her father was unable to reach out for help was because of the stigma attached to seeking therapy. She believes it's critical that we work to ease that stigma and that no one should look at getting help for emotional problems as a sign of weakness.

Anna has learned first hand what it is like to try to move through the trauma of being a survivor of suicide loss. She says that initially, she was unprepared for the magnitude of her own pain.

"I never thought you could physically feel heartbreak, but after Dad died, I felt like a piece of my heart was missing."

At the time, Anna wasn't aware that she was now among a group of survivors that, across the world, numbered in the millions. 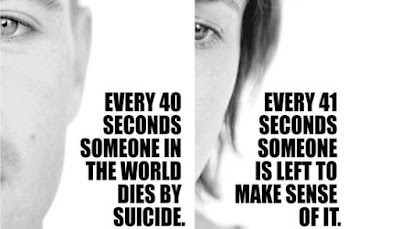 Because mental illness and suicide are so stigmatized and difficult to talk about, one of the first and most powerful emotions that new survivors of suicide loss feel, is alone.

However, this sense of isolation is inaccurate. Each year close to one million people die by suicide, and research has shown that for every loss, there is an average of six people left behind who will have to deal with profound grief.

"It was embarrassing to call family and friends, telling them that my happy and loving father took his own life. They only saw him as a optimistic person, now their view of him changed in the worst possible way. I feared they would also think differently of my family."

Anna acknowledges that it is very difficult for people who have not been through a loss to suicide to understand the complexity of the grief.

"It was around the nine month mark that people assumed Mom and I should have moved on by now."

Mirroring her own prior misconceptions about depression and grief, people suggested to Anna that working and 'getting back to life' would make her feel better. She wishes that people would understand that grief doesn't have a specific timeline.

"It doesn't work that way. I am still healing."

According to Harvard Medical School's Health Publishing article, Suicide Survivors Face Grief, Questions, and Challenges, loss through suicide is like no other:

Grieving can be especially complex and traumatic. People coping with this kind of loss often need more support than others, but may get less. Why? Survivors may be reluctant to confide that the death was self-inflicted. And when others know the circumstances of the death, they may feel uncertain about how to offer help. 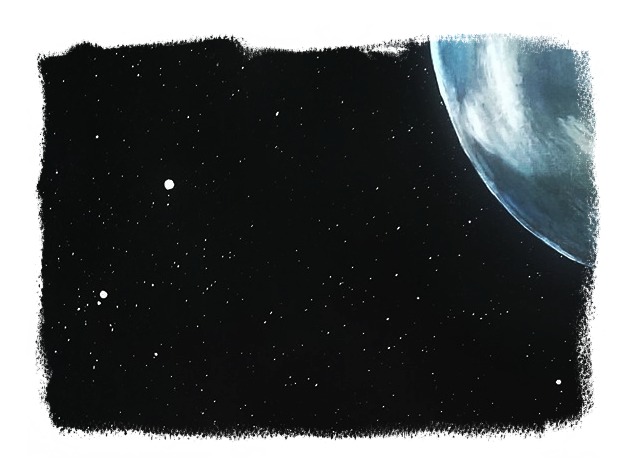 In the months following her father's death, Anna's instinct was to read books written by young people who had endured a loss similar to hers. She wanted to be able to read something that might help her cope with her grief. But, Anna was distressed when she found that books of this type were not easy to find.

"While searching online, I noticed a distinct lack of memoirs from children and young adult survivors. I wanted to change that," Anna says.

Anna herself frequently journaled in order try to process her feelings. At the end of the first year after her father died, Anna realized that she could use the journal entries to write a book that would be the type she'd been looking for. And so, that is exactly what she did.

"After writing my emotions down during the course of the year following my father's death, I published a journal-entry book titled My New Normal: Surviving Suicide Loss. It may be difficult for new survivors to read, but I wanted to show that there is light in darkness and share my journey and emotions, for those who have never lost someone to suicide."

Anna says that writing her book has been therapeutic. The process helped her to face her feelings, and writing also helped her step back and be more compassionate toward her father.

"It helped turn a lot of anger into understanding, after writing about the good times I had with Dad, while also trying to feel his pain in the final months of his life." 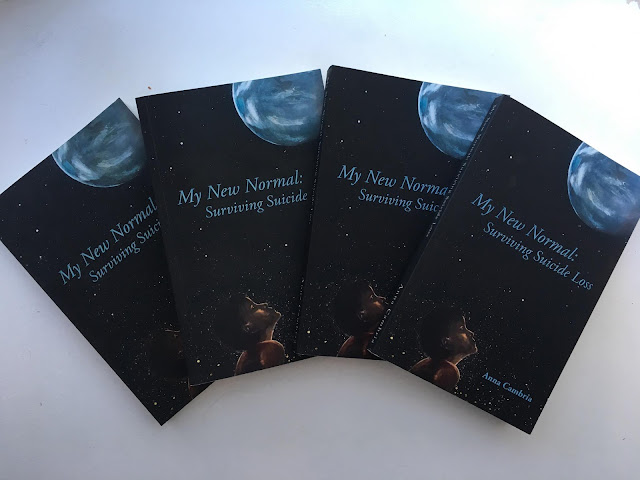 Anna did many things to begin to heal. She says that through therapy, she was able to release a lot of anger and sadness. Once she started talking about her feelings, she began to feel a little better, she says.

"The ball of stress I felt inside my chest had gone away."

Anna also joined a survivors of suicide loss support group, which she credits with helping her to understand that there were others who were dealing with the same issues related to suicide loss.

"It was the first time I was able to talk to others in my similar situation. There were young adults there who lost parents. We understood, to a certain extent, how each other felt. Everyone was comfortable talking about their story."

Anna believe that it's crucial to talk about about mental illness and suicide, in order to end stigma. She recognizes that awareness can save lives.

"We cannot guess what is going on in someone else's mind, they could be suffering while no one around them knows it."

She also acknowledges that addressing the isolation that survivors of suicide loss feel is important to their healing. She counts this as one of the important motivating factors behind her deciding to make her story public.

"We need to bring awareness so no survivor feels alone."

Ultimately though, Anna is motivated by her enduring love for her father. She wishes that he could have received the help that he needed. I asked her what she would say to him, if she had the opportunity for one more conversation, This was her reply:

"It is hard to believe I will never have you with me during important events in my life.


I wish you held on longer to accept help or turned to the loved ones who I had to witness crying and saying, 'I wish he would have come to me. I would have helped him in any possible way.'

Your family and friends love you very much."

It is in these words that we see one of the most beautiful things about Anna Cambria. The words mirror her reasons for working towards suicide awareness and prevention.

They begin and end with love. 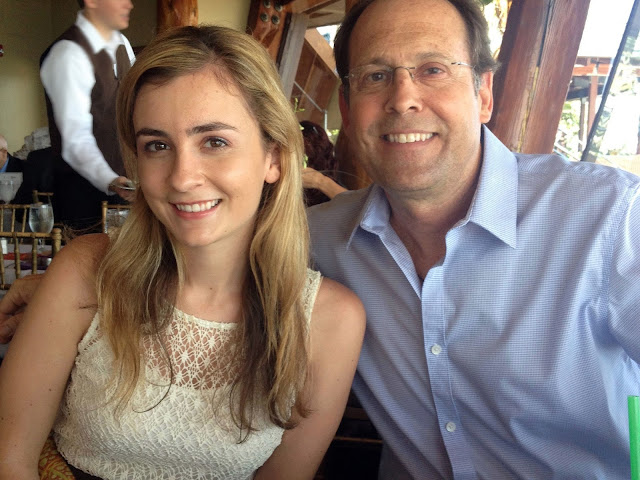 You can order Anna's book on Amazon here:

And Anna's author page on Facebook can be found here: 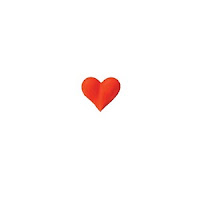 If you are a survivor of suicide loss, you are not alone. There are many resources for support. You can start by checking out AFSP survivors page, below:

American Foundation for Suicide Prevention resources for survivors of suicide loss.
at January 19, 2018