In the United States, today marks the start of Veterans Day weekend. So, make an effort to thank a veteran.

Honor veterans for their sacrifices and service, today and every day.

And always honor and remember the twenty two veterans a day who are losing their life to suicide.

To put the crisis into perspective:

In 2016, tragically, fourteen (14) active duty US military personnel were killed in action while serving in the War in Afghanistan.

During the same year, over seven thousand (7,000) veterans died by suicide.

Veterans should feel as if they are out of danger when they return from the front lines. We need to do more, and we need to start by having these conversations now.

In February of 2016 the United States Department of Veteran Affairs held the first ever Preventing Veteran Suicide—A Call to Action summit, which focused on improving mental health care access for Veterans across the nation and increasing resources for the VA Suicide Prevention Program.

As a result of that summit, the VA is undertaking a number of new measures to prevent suicide, including the use of predictive modeling to determine which Veterans may be at highest risk of suicide, so providers can intervene early. Veterans in the top 0.1% of risk, who have a 43-fold increased risk of death from suicide within a month, can be identified before clinical signs of suicidal ideation are evident in order to save lives before a crisis occurs.

The VA made a commitment to bettering services and treatment for veterans who were suffering from PTSD and other mental health conditions that were potentially fatal. Among their immediate priorities:

You too can make a difference in preventing suicide among veterans.

End stigma by having the discussions needed to ensure that these statistics are recognized as the urgent public health crisis that they represent.

Hold the Veterans Administration and the United States government accountable for following through with their commitment to do more. Keep apprised of current efforts toward veteran suicide prevention and keep those efforts in mind when voting.

Work with organizations that focus their efforts on preventing suicide among veterans. Click here to find a random sampling.

And always remember the sacrifices many have made to serve our country, thank veterans for their service, and let them know that as human beings they are appreciated, loved, and needed in this world.

Speak up for the veterans who are struggling with being suicidal. Make sure they know: 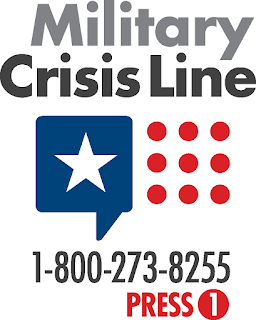